Walking through the grocery store, you'll see many foods labeled gluten-free and grain-free. Two common misconceptions are that grain and gluten free foods are carb-free or they’re one and the same thing, but there’s much more to the nutritional story.

Gluten is a protein that’s found in specific types of grain, including wheat, barley, rye, spelt and kamut. It can also be found in some medications, supplements, sauces, condiments, ice cream, sweets, processed meats (deli meats, sausage, hotdogs), and meat substitutes (veggie burgers, veggie sausage). People with celiac disease avoid gluten because it can damage the intestines. Others have gluten sensitivity which causes milder symptoms, including inflammation and digestive issues.

So, where does grain-free fit in?

Grains are the seeds of grasses and include wheat, oats, quinoa, rye, barley, corn, millet and rice to name a few. Some of these grains contain gluten, but not all of them. When going grain-free, all of these grains are removed from the diet and replaced with non-grain alternatives. Common reasons for going grain-free are to improve gut health, decrease inflammation and improve energy.

Check out these examples to separate gluten-free vs. grain-free alternatives:

Gluten-free breads and buns are made with gluten-free flours, such as rice, potato, sorghum, and tapioca. Tortillas can be made of corn flour and any of the other gluten-free flours. In comparison, grain-free breads and tortillas, are made from almond, coconut, cashew, chickpea and cassava flours. Although the base ingredients are different, they both can be topped with nut butter, or enjoyed with meat, eggs, and vegetables. 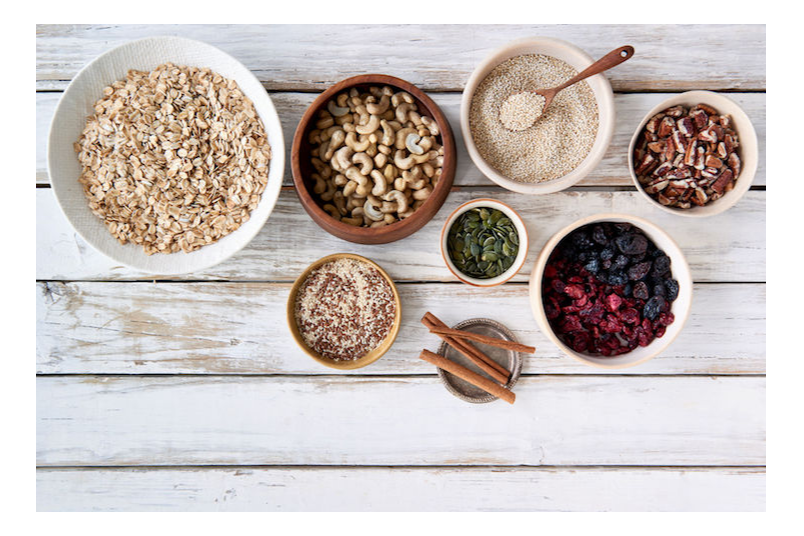 All types of rice and quinoa are naturally gluten-free, but they are grains. Substituting cauliflower rice in recipes that call for rice or other grains is a very healthy alternative. Cauliflower rice contains only 25 calories per cup (compared to 200+ calories/cup for rice and quinoa) and is loaded with fiber, potassium and vitamin C, K, and B6. If you’re watching your carbs, cauliflower has only 5 grams of carbohydrate per cup, compared to 40 to 45 grams of carb in a cup of quinoa or rice.

Just like bread, pasta is traditionally made with wheat flour, but nowadays, there are so many gluten-free pasta choices. Noodles can be made of brown or white rice, quinoa, legumes, or a blend of gluten-free grains. However, these pastas are not grain-free, except if they’re made from legumes. For grain-free pasta try spaghetti squash, spiralized zucchini, or sweet potato for a healthy alternative that’s packed with more nutrition than traditional pasta.

There are many gluten-free cereals available, including ready-to-eat cereals, granolas, and hot cereals. It’s rare to find cereals that are grain-free. The good news: Caveman Foods Grain Free Granola is both gluten-free and grain free! Loaded with heart healthy nuts and seeds, this granola is lower in sugar and full of nutrition, which makes it a perfect grain-free snack or topping for fruit, yogurt, or smoothie bowls.

By limiting grains, especially high sugar, processed carbs, your body is set up for less inflammation, which lowers the risk of Alzheimer’s disease, Type 2 Diabetes, arthritis, high blood pressure, cancer, and heart disease. And remember, it doesn’t have to be all or nothing. If eliminating all grains is unrealistic, smaller food changes can still make a difference in overall health and energy.